We’ve been fascinated – as have been many others –  by the reports alleging that John McCain actually met with ISIS militants back in May of 2013 when he made a “secret” trip to Syria. We find these reports to be credible; to the best of our knowledge they have never been effectively debunked.  And on top of that we know from previous incidents that John McCain – wittingly or unwittingly – has allowed himself to be photographed in the company of some very unsavory characters in the recent past,  like his tete a tete with Ukrainian fascist Oleh Tyahnybok of the Svoboda Party. The photos of McCain in Syria have been alleged to have shown him consorting with men who were either members of the ISIS/ISIL group at the time the photos were taken, or who joined ISIS/ISIL later on in 2013 or 2014. Here are some of the photos:

Now, we know the identity of one of these people: the man in the striped shirt with the glasses and small moustache is “General” Salim Idris, formerly of the preferred US puppet “rebel” force in Syria, the “Free Syrian Army”.  The question is not about who the people in the photo WERE in May of 2013 but who they ARE today.  It is alleged that the man on the left in the photo above is (today) none other than Abu Bakr al-Baghdadi – the head honcho in ISIS/ISIL.  The man standing to the far left in photo #2 is alleged to be  Khalid al-Hamad, identified as the “heart eater” from an infamous ISIS/ISIL video: 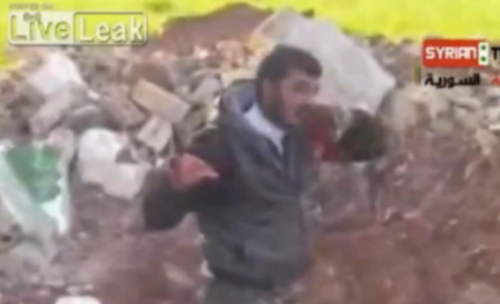 General Idris, who was apparently an actual “General” in the Syrian military until a couple of years ago, is not what is knows as a “fighting general”; in fact,  he is better known as a “running General”; yet that didn’t stop the US Government and John McCain from installing him as their puppet leader of the US/NATO puppet “Free Syrian Army”. At any rate, no one denies that McCain went to Syria in May 2013 to meet with “Syrian moderates” fighting the Assad regime.  What is in dispute is the political/military affiliation of the men sitting around the table chatting with John McCain. When  woman-hating right-wing Republican/Libertarian blowhard Rand Paul  took fellow Republican McCain to task for posing for photos with ISIS, he was roundly lambasted for his foolishness by (mostly) pro-Democratic party “journalists”.   The New York Times even ridiculed everyone dumb enough to fall for the “obvious” fraud.  The Washington Post weighed weighed in, heavily, with an attack piece on Rand Paul’s adherence to the “fraud” of McCain’s alleged meeting with ISIS militants.  The WaPo’s clumsy hatchet man, Glenn Kessler, even had the temerity to drop this bon mot:  “Last time we checked, the Times is still a more credible source than Weasel Zippers.” Seems the folks down there at both the Washington Post and at America’s “Newspaper of Record” have long ago managed to choke down the last of their heaping helping of humble pie dished out to them by a certain Judith Miller. The problem is that none of the august bourgeois press outlets so much as bothered to actually refute the sources of the story of McCain’s meeting with ISIS.  Instead, in the case of Washington Post, they attacked the credibility of the small-time online journalists and alternative news outlets, rather than providing an actual rebuttal of the McCain/ISIS meeting.  “A variety of Web sites began to claim that Islamic State posted photographs of McCain posing with its members, news sources of dubious value called Weasel Zippers, Counter Current News, Atlas Shrugged and Socio-Economics History Blog. Usually, the accounts provided limited or no sourcing, just photographs of McCain with alleged Islamic State members circled. Socio-Economics, which says it presents news in a satirical way, also suggests that the head of the Islamic State is a Mossad agent and has two Jewish parents” quoth the Post.  See how that’s done, future “Reputable Journalists of America”?  You don’t need to rebut the content of the allegations so long as they come from a news organization that doesn’t have the “access” to “unnamed sources” in the top levels of the government like Judith Miller had.  Nowhere in the Post article does the author-assassin bother to actually assess the claims made in any of these various news organizations’ stories about the McCain/ISIS meeting. The New York Times takes a similar tack.  In their article “rebutting” the claims of a McCain/ISIS meeting, they even go so far as to edit the photo of McCain the alleged ISIS members in order to remove from view the alleged “heart-eater” Khalid al-Hamad.  Compare this photo with photos 1 and 2 above:

The photo of the man circled in red is supposed by everyone who claims that McCain met with ISIS to be ISIS top man al-Baghdadi.  How does the new York Times refute this claim?  “The rumors are based partly on images of a Syrian fighter who resembles Mr. Baghdadi, seen in photographs with Mr. McCain — some originally posted on Twitter by the senator — during his visit in May 2013 to northern Syria […]  Nurtured by conspiracy blogposts, social media and photo-altering tricks, the false rumors of Mr. McCain’s relationship with ISIS have taken on a life of their own. One doctored photo shows the senator, an Arizona Republican, pinning a medal on Mr. Baghdadi’s chest.”

Not only does the New York Times not bother to show the “doctored” photo of McCain pinning a medal on “Baghdadi”‘s chest; it doesn’t mention the fact that the photo it does provide is itself doctored to remove another man alleged to be a member of ISIS.

Our friends at “Friends of WikiLeaks – Chicago” had a series of interesting Tweets with a man who goes by the name of @soccerMouaz who turns out to be the same based-out-of-Washington D.C. pro-US-invasion-of-Syria cretin widely quoted by both the Times and the Post: one Mouaz Moustafa.  He ridiculed FoWL Chicago for falling for the fraudulent claim that McCain met ISIS at this meeting pictured above.  Yet, when FoWL Chicago challenged Moustafa to identify the men in the photo in order to put the matter to rest – he declined. Here are a couple of highlights of the FoWL Chicago/ Mouaz Moustafa joust: 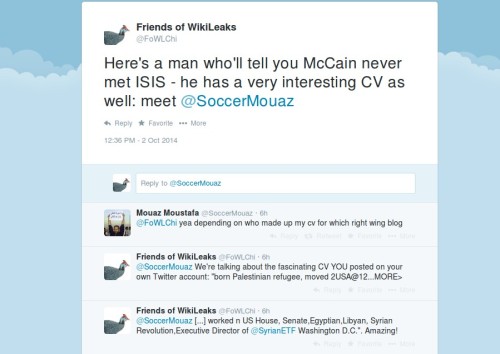 In the Times article above, we read this: “Mouaz Moustafa, the executive director of the Syrian Emergency Task Force, a Washington-based group that helped to arrange the senator’s visit, said all of the people who appeared in those photographs were at risk. When ISIS published the first issue of its magazine, Mr. Moustafa said, it featured one of the photographs and proclaimed, ‘We have to cut all these people’s heads off.’ ”  Okay… so where is THAT photo?  Where is the screenshot of the ISIS website where that appeared?  We have not found it anywhere.  Everywhere we look, we see the “reputable press” doing its best to ridicule a story without providing a shred of proof that the story is based on falsehoods.  The Times again: “Brian Rogers, Mr. McCain’s communications director, was not amused. The man who was misidentified as Mr. Baghdadi in the photographs, Mr. Rogers said Thursday, was a commander of the Northern Storm Brigade, a group linked to the Free Syrian Army. Mr. Rogers declined to identify him by name, saying he feared for the man’s safety.” “Feared for the man’s safety”?  He’s in a WAR ZONE!  His photo has been splashed all over the Internet already!  We are not asking for the geographical coordinates of his home, we’re only asking who he is!  Can’t anyone provide a profile of the man?  An interview with proof that while he was in Syria with the FSA, al-Baghdadi was somewhere else?  The total refusal by the members of the loyal, pro-US, pro-war bourgeois press to provide any documentary evidence seems calculated to instill rather than to dispel the doubts of those prone to adhere to conspiracy theories.  And, as we mentioned above, given McCain’s known penchant for being photographed in the company of people most US citizens would not allow to darken their doorsteps – like the Ukrainian Nazis – the refusal of the Times or the Post to go the extra distance to prove their arguments seems odd indeed. As if this all wasn’t weird enough, as we started to work on this piece we read this op-ed in the Times!:   How America Helped ISIS Now we really are confused! What seems to us to lay at the heart of the confusion is a phenomenon known to exist in the capitalist world – an utter inability to see the totality of events due to the myopic worldview of the capitalist class.  Marxists like us see the world as an ever changing kaleidoscope of events, each one melding and evolving into the next in an evolutionary fashion.  People who live “inside the box” of the capitalist worldview see only the trees, not the forest; and they see the forest as a eternal reality, not as something that is being born and dying at the same time. In the present case, they can’t seem to understand that although McCain may not have actually intended to meet with ISIS militants, that may in fact have been precisely what he did, because in a fast-moving environment of the type taking place in Syria, yesterday’s “Free Syrian Army” transforms itself into today’s ISIS. ISIS is, after all, (according to the Times itself) merely a recently “rebranded” “Al Qaeda in Iraq”: “In June 2010, Stratfor published a report on the group that considered its prospects in the wake of the killings of the top leadership. The report stated, ‘the militant organization’s future for success looks bleak.’ “Still, the report said, referring to the Islamic State of Iraq, then an alternative name for Al Qaeda in Iraq, ‘I.S.I.’s intent to establish an Islamic caliphate in Iraq has not diminished.'” And even today, the New York Times itself maintains relics of the “old names” for ISIS on its website, switching back and forth between the too-unwieldy “Al Qaeda in Mesopotamia” and “ISIS”: 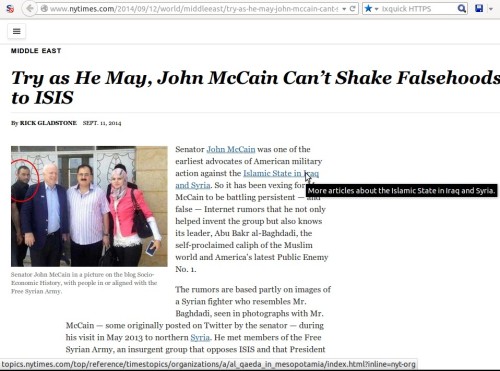 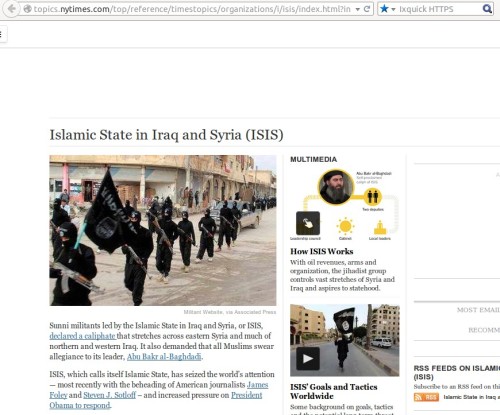 So it seems that with all the change going on in these organizations over the course of a year of civil war, no one really knows just who is who after all. Last year’s “Al Qaeda in Mesopotamia” is this year’s “ISIS”.  “Old poison, new bottle” as our friends at FoWL Chicago put it.   So perhaps all these “non-denial denials” emanating from the Times, the Post and from all other “reputable” news media organizations (you could call them “pro-US imperialist propaganda sheets”; a rose by any other name being… you know) are just desperate attempts to stay “on message” as the US capitalist class and its bought-and-paid-for politicians and “knights of the pen” bang the drums for yet another war. In May of 2013, no one heard of ISIS; the main enemy was still “Al Qaeda”.  Fast-forward 12 months or so and “Al Qaeda” can’t get hardly any press no more!  It’s all “ISIS, ISIS, ISIS!”  Who IS doing the PR for ISIS?  They’re damned good, aren’t they? Until we see some proof that al-Baghdadi was definitely NOT in the room with McCain in that photo, and that the ISIS “heart-eater” was NOT the guy in the pics outside the meeting room, we will lean towards believing that once again, that old warmonger “Jihad John” McCain fucked up. US/UN/NATO HANDS OFF SYRIA! Workers of the World, Unite! IWPCHI