In an interesting press release from the National Weather Service’s office in Chicago, it is related that one of the reasons why Chicago recently experienced its first 3-day period of 100-degree-plus temperatures – in spite of daily breezes coming off Lake Michigan – was due to the fact that the water temperature in Lake Michigan has reached 80 degrees F earlier in the year than ever before.

The press release states that in the 160 years or so of relatively continuous weather data recorded in the Chicago area, only six other times has the water temperature ever hit 80 degrees F in the southern part of the lake – and that usually doesn’t happen until later in the summer around August or September.

This image shows the radar echo of the lake breeze coming ashore on the afternoon of July 6, 2012: 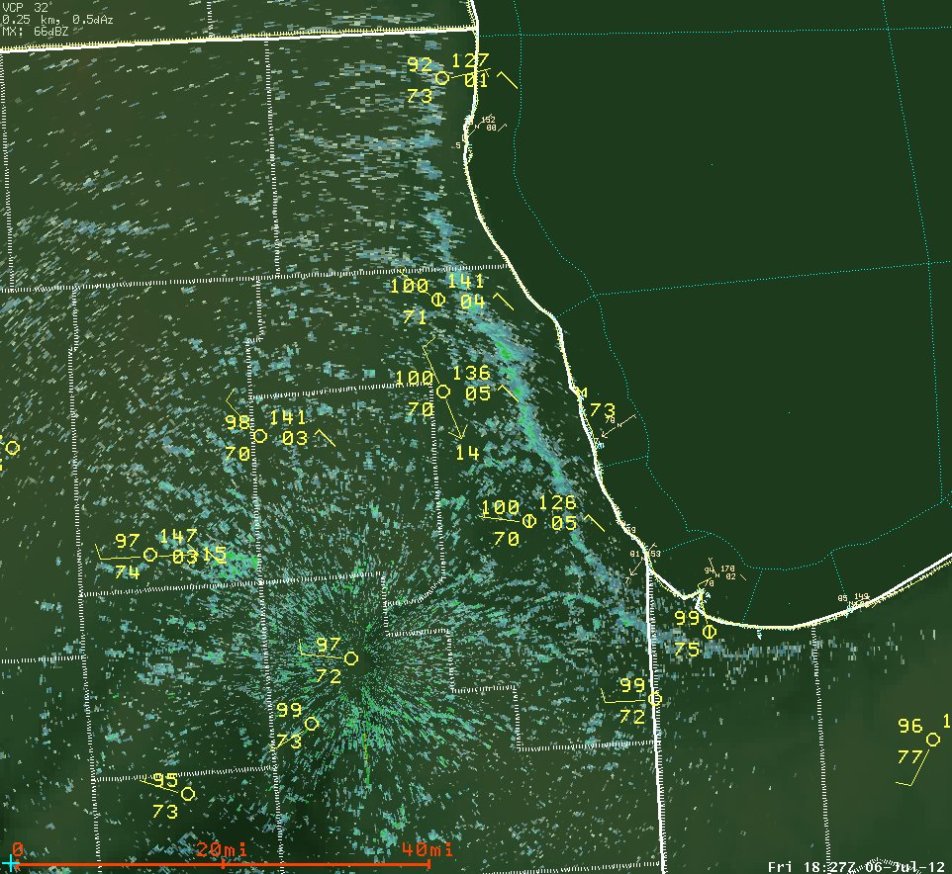 In this image, the thick blue line hugging the contours of the Lake Michigan shoreline from the Wisconsin border to northwest Indiana shows the cooler lake breeze after coming ashore around 2:30 PM local time (“18:27Z” or “Zulu” time – also known as “Greenwich Mean Time”, which in the summer is 6 hours ahead of Chicago local time).

Near the Wisconsin border in the upper right of the image you can see that although the lake breeze has passed beyond the recording station there, the air temperature has fallen to just 92F – a mere 8 degrees lower than the next temperature reading shown further south near the Cook County/Lake County border.  [The wind direction indicators have the temperature reading above the dewpoint readings to the left of the round circle – in this example: 92 degrees F and a dewpoint of 73 degrees F.  The numbers to the right are the azimuth readings for wind direction – in this case 127 degrees or from the southeast.  The number below that… uh… we’ll have to look that up…]

In northwest Indiana you can see another clear indication of this phenomenon.  Though the lake breeze has clearly passed the weather station, the temperature there is still at 99F – the same as the station located 10 miles south-southwest, which has not yet felt the lake breeze!

In addition to the raw temperature readings not being mitigated by the onshore breezes, the dewpoint readings, which add to the heat index readings as they rise, actually rose AFTER the lake breeze had passed, which made the felt temperature even worse than before the lake breeze passage!

What this means is that if Chicago was to experience a heat wave similar to the one we just experienced a week ago – which killed at least 18 mostly poor, working-class citizens  – we can not expect this large metropolis to gain much of its customary relief from winds coming off the lake.  The usual cooling effect of the lake has become negligible due to the unusually high temperatures we’ve experienced so far this summer.  This could lead to another inexcusable loss of life due to the brutalities of the capitalist system, under which poor people routinely have their electricity shut off in the summer due to their inability to pay off last winter’s heating bills.  This year, the capitalist press is expressing its joy that the untimely deaths of “only” 18 people so far have been attributed to “heat-related illness”.

While we mourn the deaths of 18 of our working-class brothers and sisters this week, we recall with horror the heat-related MURDERS of over 750 workers during a five-day heat wave back in 1995 – most of whom were elderly and/or poor working-class people who either had their air conditioning turned off because they couldn’t afford it, or who had no air conditioning in their homes at all (for the same reason) – or who had their electricity turned of by Commonwealth Edison for “non-payment”.  Thus capitalism murdered these folks just as surely as if the CEO of Commonwealth Edison had shot them to death personally.

Thanks to the fact that, as in 1995, we continue to live under the capitalist system – and to the fact that the economy now is much worse than it was in 1995- we have an even higher likelihood now of breaking that shameful record in 1995.  Undoubtedly, due to the present collapse of the capitalist system, there are even more people this year who have had their electricity shut off than in ’95.  And thanks to cuts in public transportation over the past 17 years, it is even harder now for elderly people to reach a “cooling center” than it was before.

Thanks to the fact that the working class of the United States, lacking any political leadership worthy of it,  has not advanced a foot politically since 1995, but has, in fact, slipped even further backward over the past 17 years, today the citizens of Chicago are even more nakedly exposed to the predations of the capitalist system as they were then.  Until such a revolutionary working-class leadership is built from the ashes of the “old left”, we can confidently predict that more sickening events which can only be described as the mass murder of 750 poor workers in Chicago in 1995 will continue to occur here in “the land of the free”.