Why does the U.S. have such a corrupt, vicious government? Because the people of the U.S. like it this way.

We saw more than a hint of this national selfishness in the endless, prating U.S. side of the discussion about the National Security Agency’s spy operations targeting people all over the world.  Here in the United States, those workers who did complain about the spying (actually very few seem to care very much about anything at all) focused their anger on the fact that the NSA was spying on AMERICANS.  They couldn’t care less about the US Government’s rampant violations of the rights of the inhabitants of the rest of the planet.

This vicious nationalism is quite reminiscent of the mentality of workers in Germany during the reign of Hitler’s Nazis.  There, too, the citizens did not care what the government was doing, so long as there were jobs for everyone and life was improving after the long nightmare of the economic collapse that followed Germany’s defeat in WWI.  In Germany in 1941, no one cared about the fate of the Jews, just as in the United States in 2014, no one seems to care about the growing number of victims of the US military’s drone strikes, or the mass murder of civilians in Iraq and Afghanistan, or anything else that is caused by the US capitalist class’ unbridled greed, which drives them to commit atrocity after atrocity, decade after decade, while the citizens of the United States pretend that there is nothing they can do to change government policy.  The citizens of the United States act as if they have tried very hard to change the government, but have found out after decades of trying that “you just can’t fight Washington”.  In fact, they have not even attempted to oppose the US Government’s brutal raping of the Middle East and western Asia ‘lo these many years.  Because they just don’t care.  The vast majority of the citizens of the United States aren’t “nice, friendly, generous” people any more than the citizens of Hitler’s Germany were “nice friendly, generous people”.

So what do Americans care about?  What kinds of causes are they willing to support with their hard-earned dollars?  What are the important issues and grass-roots efforts that are rousing Americans out of their vast apathy/malevolence towards their fellow men and women and causing them to open up their checkbooks and donate money to a worthy cause?

Indiegogo is the most successful crowdfunding organization in the United States today.  It provides an online platform for those seeking to raise money for any kind of cause imaginable, from funding the development of worthless junk to funding political parties like ours.  So, perhaps if we take a look at the most popular campaigns on Indiegogo we will get a good look into the “hearts and minds” of those “happy, friendly and generous” 2014 U.S. versions of the citizens of Hitler’s Germany!  After all, Indiegogo’s mantra is “Fund what matters to you”. Let’s take a look.

Indiegogo homepage: “Fund what matters to you”

So, what “matters” to our lovely American fellow citizens in 2014?  Here are the top ten most funded campaigns on Indiegogo as of today, 20 March 2014: 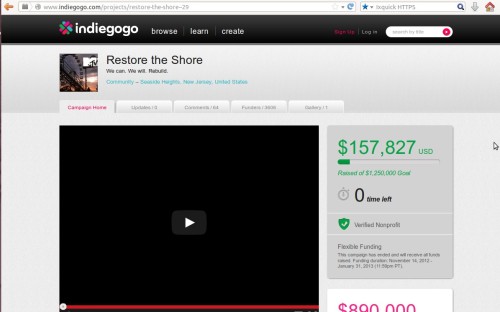 Restoring the New Jersey Shore, devastated by Hurricane Sandy, doesn’t register with Americans any more in 2014

Are Americans worried about drones? Damn right! They’re worried that their neighbors will get one before they do. 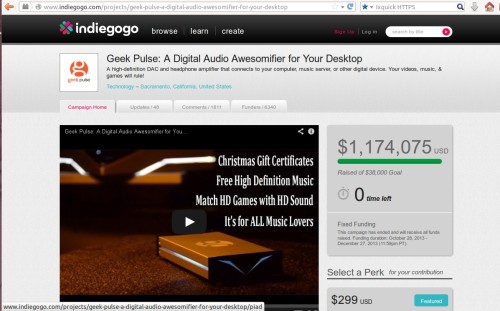 This is so incredibly stupid it beggars belief. What do these people have to produce in order for this not to be a first-class case of fraud?

This would be a ridiculous waste of money if it weren’t for the fact that it’s THROWABLE! WHEEE!

#6: AIRTAME WIRELESS HDMI FOR EVERYONE!

Wireless HDMI for everyone! Well, everyone who owns a computer, anyway. Are there really people who don’t own a computer? Ewwwwww!

Someone call Rotary International and see if they can spend some time on something important for once.

#4:  KREYOS: THE ONLY SMARTWATCH WITH VOICE AND GESTURE CONTROL! 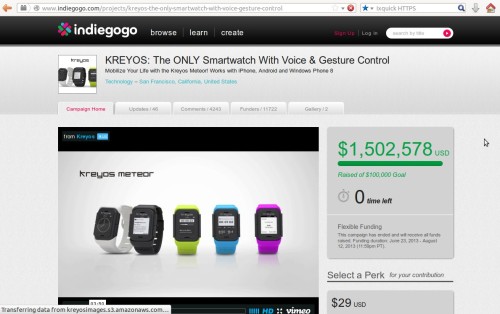 We can think of only one gesture we’d like to make after seeing this.

It will even keep your conscience from troubling you over trivial things like the burgeoning US police state and NSA spying!

We bet that after finally having the chance to appreciate all these wonderfully frivolous (and mostly wildly successful) fundraising campaigns that have captivated the imaginations of today’s American version of the Hitler Youth, you’re just dying to see what has been the number one fundraising boondoggle of the year so far! Right?  Right?  We’ll get ready to be disgusted/disappointed:

Well, look on the bright side: sure, they managed to raise over $12 million for the development of a device no one wants, but at least they fell far short of the $32 MILLION these fuckwads WANTED to raise for their “revolutionary” P.O.S..

Now, we know what all our stupid fellow American citizens are gonna say to this: “Wait a minute!  There are a lot of great campaigns being funded on Indiegogo that PROVE how selfless and generous we Americans really are!  You’re not showing the world how much we care at all!”  OK, we’ll show some examples of your overweening generosity:

300 million Americans have managed to raise just $60,000 to repair an abortion clinic vandalized by anti-abortion fanatics 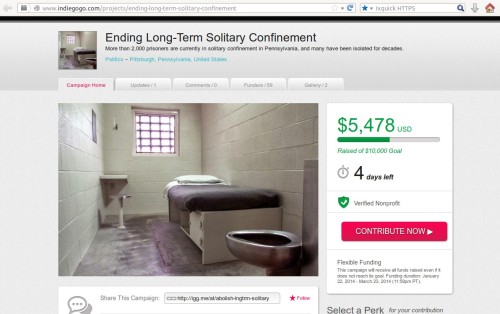 300 million Americans care enough about the horrendous conditions in US prisons to donate $5,400.00 to end solitary confinement in Pennsylvania

300 million Americans care enough about the fight to defend our right to be free from the US Government’s warrantless surveillance programs that they raised $2,000 for the cause.

So the next time you hear an American worker complaining about how bad things are getting in the United States and winding up the complaint with “but what can we do about it?” remember:  Americans aren’t even trying to change things for the better.  Because, as of March, 2014, they really don’t give a shit.