To commemorate the 71st anniversary of the US war crime of the dropping of the atomic bomb on the city of Hiroshima, Japan, we present excerpts from the book “Hiroshima Diary” by Dr. Michihiko Hachiya.  On August 6, 1945 Dr. Hachiya was the Director of the Hiroshima Communications Hospital, one of the few facilities that was not completely leveled by the nuclear blast.  At home at the time of the explosion, not far from ground zero, Dr. Hachiya was severely injured.  Unable to work in the days after the attack, he began to keep a diary of the events taking place around him.  These excerpts are personal accounts of witnesses in Hiroshima on August 6th and 7th – eyewitnesses to the immense human toll of the bombing , which we do not see in many photographs.  Photographs of the thousands of dead taken immediately after the blast are kept hidden from the public, though they do exist.  Immediately after the end of WWII, the US Government began a massive propaganda campaign in an attempt to get US citizens comfortable with the idea of surviving as victors in a nuclear war with the USSR and China.  Graphic images of what happens to human beings in a nuclear war were not allowed to be shown; instead, children were taught to “duck and cover” under their flimsy school desks when they saw the flash from a nuclear bomb.  At home, people were encouraged to build air raid shelters and bomb-proof bunkers under their homes, and to keep them stocked with canned goods and water so they could survive the immediate effects of the A-bomb.  But the oral and written histories of Hiroshima and Nagasaki tell a different story: one of unimaginable horror and human suffering that was inescapable for almost everyone within 5 miles of the center of the explosion.  Today’s nuclear weapons are many times more powerful than the bombs dropped on Japan; so these eyewitness accounts give us only a hint of what would happen in a modern nuclear war.  As the capitalist world hurtles toward World War III we offer this brief look at what lies in store for all of us unless we the workers put an end to the capitalist system of exploitation, poverty and war and establish a global coalition of egalitarian socialist workers republics in its place.

The US Government, which launched wars in Korea that killed 3 million, Vietnam (another 3 million); backed dictatorships throughout South and Central America and the Caribbean that slaughtered hundreds of thousands of workers and trade union leaders; organized the slaughter of hundreds of thousands of workers in the Philippines and Indonesia; and has killed over 1 million in Iraq and hundreds of thousands in Afghanistan, Pakistan, Libya and Syria tries to sell the big lie that ISIL/ISIS are ruthless killers!  The most ruthless mass-murderers on this planet – the US capitalist class and their blood-soaked government – slaughtered more workers in two days in August 1945 than ISIL/ISIS – vicious as they certainly are – has killed in the past two years!  And more often than not, the US political party in power that ends up happily leading workers into a slaughterhouse at the behest of their corporate owners is… the “lesser evil” Democratic Party!

U.S. capitalism must die so the working classes of the U.S. and the world may live!  Workers of the world, unite! 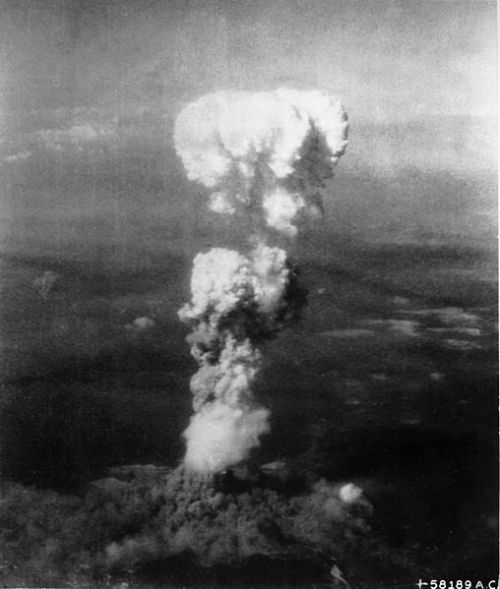 “Don’t go,” I said. “Please tell us more of what occurred yesterday.”

“It was a horrible sight,” said Dr. Tabuchi. “Hundreds of injured people who were trying to escape the hills passed our house. The sight of them was almost unbearable. Their faces and hands were burnt and swollen; and great sheets of skin had peeled away from their tissues to hang down like rags on a scarecrow. They moved like a line of ants. All through the night, they went past our house, but this morning they had stopped. I found them lying on both sides of the road so thick that it was impossible to pass without stepping on them.” 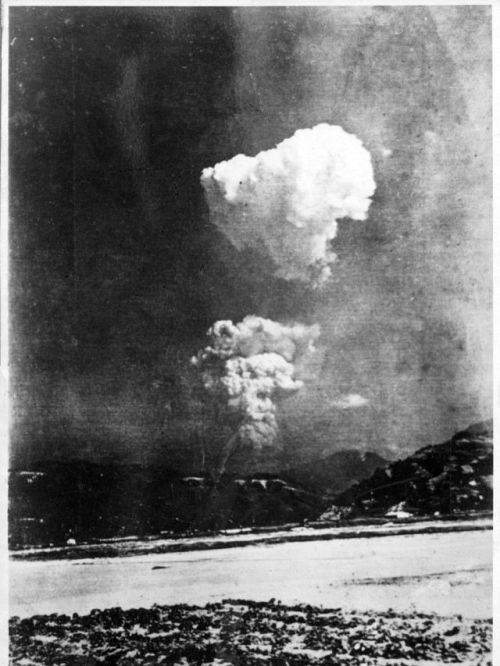 “I lay with my eyes shut while Dr. Tabuchi was talking, picturing in my mind the horror he was describing. I neither saw nor heard Mr. Katsutani when he came in. It was not until I heard someone sobbing that my attention was attracted, and I recognized my old friend. I had known Mr. Katsutani for many years and knew him to be an emotional person, but even so, to see him break down made tears come to my eyes. He had come all the way from Jigozen to look for me, and now that he had found me, emotion overcame him.

He turned to Dr. Sasada and said brokenly: “Yesterday, it was impossible to enter Hiroshima, else I would have come. Even today fires are still burning in some places. You should see how the city has changed. When I reached the Misasa Bridge this morning, everything before me was gone, even the castle. These buildings here are the only ones left anywhere around. 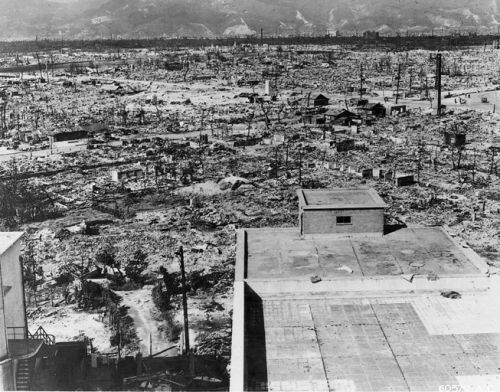 Effects of the atomic bomb on Hiroshima. View from the top of the Red Cross Hospital looking northwest. Frame buildings recently erected. 1945, US Department of Defense

“Mr. Katsutani paused for a moment to catch his breath and went on: “I really walked along the railroad tracks to get here, but even they were littered with electric wires and broken railway cars, and the dead and wounded lay everywhere. When I reached the bridge, I saw a dreadful thing. It was unbelievable. There was a man, stone dead, sitting on his bicycle as it leaned against the bridge railing. It is hard to believe that such a thing could happen!”

He repeated himself two or three times as if to convince himself that what he said was true and then continued: “It seems that most of the dead people were either on the bridge or beneath it. You could tell that many had gone down to the river to get a drink of water and had died where they lay. I saw a few live people still in the water, knocking against the dead as they floated down the river. There must have been hundreds and thousands who fled to the river to escape the fire and then drowned.

“The sight of the soldiers, though, was more dreadful than the dead people floating down the river. I came onto I don’t know how many, burned from the hips up; and where the skin had peeled, their flesh was wet and mushy. They must have been wearing their military caps because the black hair on top of their heads was not burned. It made them look like they were wearing black lacquer bowls.

“And they had no faces! Their eyes, noses and mouths had been burned away, and it looked like their ears had melted off. It was hard to tell front from back. One soldier, whose features had been destroyed and was left with his white teeth sticking out, asked me for some water, but I didn’t have any. I clasped my hands and prayed for him. He didn’t say anything more. His plea for water must have been his last words. The way they were burned, I wonder if they didn’t have their coats off when the bomb exploded.”

Somebody asked him what he was doing when the explosion occurred. […]

“I was the ranking officer in the local branch of the Ex-officer’s Association, but even I didn’t know what to do because that day the villagers under my command had been sent off to Miyajima [the next village towards Hiroshima from where he was in Jigozen, approximately 10 miles southwest of ground zero – IWPCHI] for labor service. I looked all around to find someone to help me make a rescue squad, but I couldn’t find anybody. While I was still looking for help, wounded people began to stream into the village. I asked them what had happened, but all they could tell me was that Hiroshima had been destroyed and everybody was leaving the city. With that I got on my bicycle and rode as fast as I could towards Itsukaichi. By the time I got there, the road was jammed with people, and so was every path and byway. 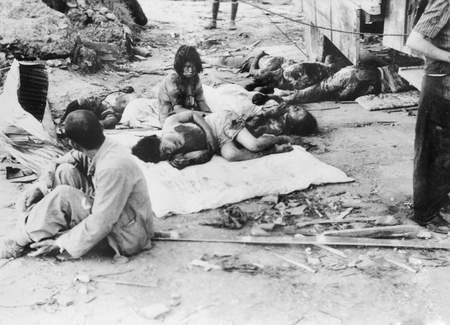 “I saw no badly wounded or burned people around Itsukaichi, but when I reached Kusatsu, nearly everybody was badly hurt. The nearer I got to Hiroshima the more I saw until by the time I had reached Koi [a railroad station on the very western limits of the city] they were all so badly injured, I could not bear to look into their faces. They smelled like burning hair. 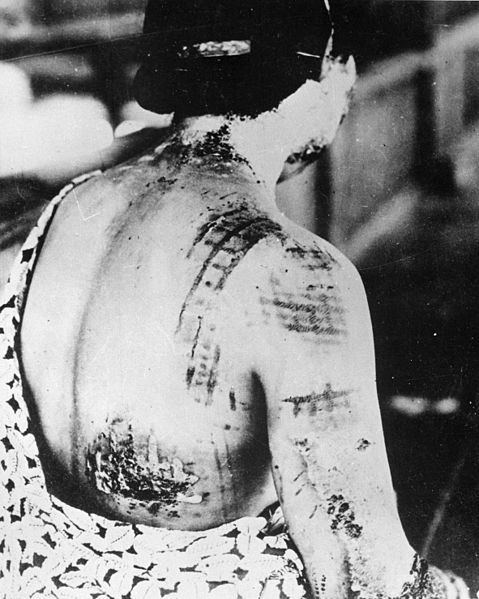 “The patient’s skin is burned in a pattern corresponding to the
dark portions of a kimono.”  Credit: U.S. National Archives and Records Administration 519686

“The area around Koi station was not burned, but the station and the houses nearby were badly damaged. Every square inch of the station platform was packed with wounded people. Some were standing; others lying down. They were all pleading for water. Now and then you could hear a child calling for its mother. It was a living hell, I tell you! It was a living hell!

“Today it was the same way. […] I left Koi station and went over to the Koi primary school. By then, the school had been turned into an emergency hospital and was already crowded with desperately injured people. Even the playground was packed with the dead and dying. They looked like so many cod fish spread out for drying. What a pitiful sight it was to see them lying there in the hot sun. Even I could tell they were all going to die.”

Dr. Hanaoka made an appearance. “Let me tell you, if I can, what happened,” he said. “I stopped by the Red Cross Hospital on my way here. It is swamped with patients, and outside the dead and dying are lined up on either side of the street as far east as the Miyuki Bridge.

“Between the Red Cross Hospital and the center of the city I saw nothing that wasn’t burned to a crisp. Streetcars were standing at Kawaya-cho and inside were dozens of bodies, blackened beyond recognition. I saw fire reservoirs filled to the brim with dead people who looked as though they had been boiled alive. In one reservoir I saw a man, horribly burned, crouching beside another man who was dead. He was drinking blood-stained water out of the reservoir. Even if I had tried to stop him, it wouldn’t have done any good; he was completely out of his head. In one reservoir there were so many dead people there wasn’t enough room for them to fall over. They must have died sitting in the water.

“Even the swimming pool at the Prefectural First Middle School is filled with dead people. They must have suffocated while they sat in the water trying to escape the fire because they didn’t appear to be burned.

Dr. Hanaoka cleared his throat, and after a moment continued: “Dr. Hachiya, that pool wasn’t big enough to accommodate everybody who tried to get in it. You could tell that by looking around the sides. I don’t know how many were caught by death with their heads hanging over the edge. In one pool I saw some people who were still alive, sitting in the water with dead all around them. They were too weak to get out. People were trying to help them, but I am sure they must have died. I apologize for telling you these things, but they are true. I don’t see how anyone got out alive…” 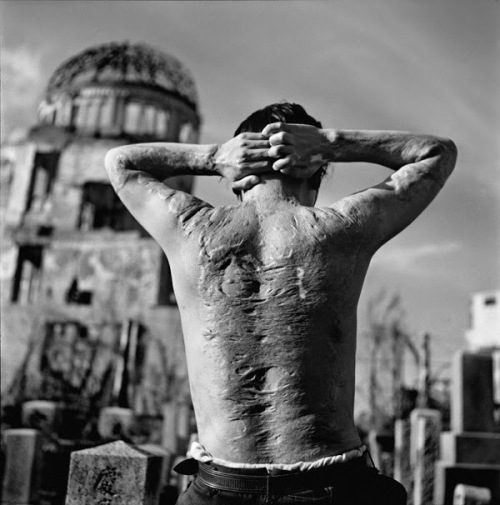 Comments Off on 6 August 2016: 71st Anniversary of U.S. War Crime – the A-Bombing of Hiroshima, Japan

Posted in Democratic Party (US), Hiroshima and Nagasaki, History, Independent Workers Party, Racism, The March to World War Three, Torture, United States, US, US, US Government Scandals, US Military Scandals, US War Crimes, War on the Working Class, WWII