100th Anniversary of the “Worst Racial Massacre in US History”: the Elaine, Arkansas “Race Riot” of 1919 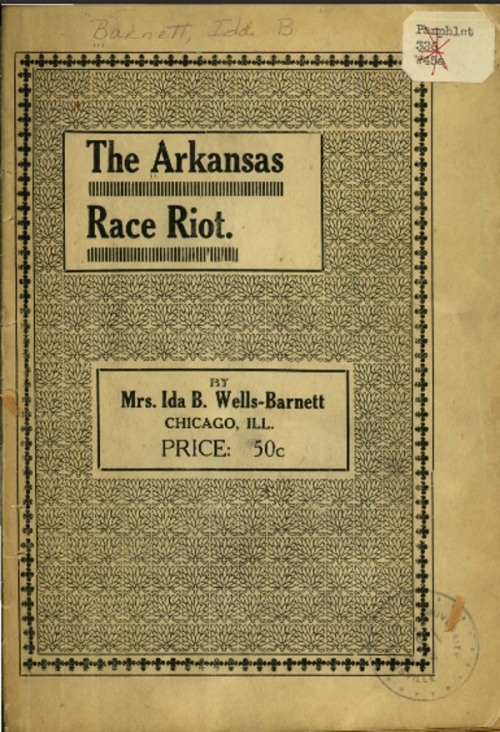 The Arkansas Race Riot by Ida B Wells (1920) cover.  Source: The Internet Archive

We are very pleased to present to our readers Ida B. Wells’ account of what has been called “the worst racial massacre in U.S. history”: the 1919 mass-murder of the black citizens of Elaine, Arkansas, on the 100th anniversary of this horrific event.

Racism is an endemic part of the capitalist economic system and can not be reformed away. The capitalist classes of the world, in order to maintain the hegemony of their numerically tiny minority over the vast numbers of workers, utilize every method available to keep the working class forces fighting each other so that the capitalist class can more easily rob the workers blind. By dividing the workers against themselves along racial, sexual, religious and national-origin lines the capitalist class has for the most part successfully maintained their class minority’s domination over the working class supermajority. Only in a handful of countries have the workers successfully fought to emancipate themselves from capitalist class domination and exploitation: in the USSR, China, North Korea, Vietnam, Cuba and Cambodia. In *every* successful workers socialist revolution in history a Leninist vanguard party (or an organization closely modeled on the Leninist vanguard party) was created to lead the struggle. Only through workers socialist revolution can the working class emancipate itself from the systematic economic exploitation of the capitalist class. In order to achieve that goal, the working class *must* create its own revolutionary working class vanguard party based on the revolutionary socialist political ideology of Marx, Engels, Lenin and Trotsky.  Our goal is to organize such a party. All anti-racist workers are encouraged to contact us and join in this great work!  Workers of the World, Unite!

Thanks to the Internet Archive for the copy of this original document.